Chances are you have a image in your head when you hear the words “Japanese art”. You probably imagine a Ukiyoe print of Mount Fuji or perhaps a Sumi painting. You almost certainly are not reminded of the covers over sewer holes. Yet, that’s exactly where you’ll find a unique form of Japanese arts.

Japanese manhole covers are so interesting that a veritable cult of manhole lovers has emerged on the internet. Enthusiasts have built extensive galleries of manhole cover images from around the country, and an Association of Manhole Cover Watchers organizes walking tours for fellow connoisseurs.

So the next time you find yourself wandering the streets of Japan looking for something interesting or artistic, make sure you take a moment to look down at the ground.

As viewers of Samurai Champloo know, there is a long tradition of Japanese influence on Western art. Of course, if you did indeed learn this tidbit from watching anime, it is clear proof that someone forgot to pay attention during art history class. Then again, if you’re watching anime, you’re following in the footsteps of luminaries such as Vincent Van Gogh.

British artist Grayson Perry is spending time in the Japanese city of Kanazawa, preparing for an exhibition. She learns the hard way that working through a translator is not necessarily the best avenue for British humor:

On my first day there I met the head of the art college, the director of the museum and the mayor. Each meeting was a little ceremonial; we exchanged business cards, drank green tea and chatted, watched over by a dozen or so attendants and local media. Like most people I met in Kanazawa they were warm and gentle and liked a joke. I would use the translator as a kind of buffer and would try out a quip on her, on which she might choke with laughter, sometimes I thought she used diplomacy in the translation. I would then wait for what seemed an age for my host’s chuckle while she relayed my casual banter. I had to be satisfied with about a 30 per cent joke-to-laugh ratio.

While exploring the parallels between her world and Kanazawa, Perry found herself intrigued by the general orderliness of her temporary world, comparing it to England:

I think of all the rules that hold this society together. In the UK we seem to need more and more laws to control the anarchic individualism for which we pride ourselves â€” many of us have lost a natural sense of what is decent behaviour. In Japan in ten days I never saw one policeman. I guess their laws are internal, every citizen carrying quite a burden of shoulds and shouldn’ts.

Perry found herself seeking the darkness in the heart of the Japanese culture. Typical artist — always looking for the dark cloud in front of the silver lining. It’s there. No society is perfect. Of course, as she searches, she also takes a potshot at the Western artists who fell for one of the world’s oldest tricks:

The Impressionists and post-Impressionists fell for cheap woodblock prints which were used as wrapping paper for cargoes of porcelain.

If it seems like we’re a little anime-obsessed this week, well, it’s because we are. Two new (to us) series have captured our imagination, and it seems the news is feeding our obsessions by running lots of stories on the topic. Like the behind-the-scenes look at the anime industry that recently appeared inBusiness Week.

Industry insiders in both Japan and the United States are seeing the massive anime business as the next big Japanese export. From nighttime television to action figures, the potential for growth is explosive. But, we see, behind every explosion is the potential for implosion.

According to a Business Week source, roughly 99% of anime has never been seen outside of Japan, and those shows which are successfully exported don’t necessarily translate to big money for this labor-intensive art. While certain series are finding international audiences through the magic of anime-obsessed Internet fans who are willing to spend time and energy creating fan-subs (subtitling the works in their native languages), this method of distribution doesn’t provide much of a revenue stream. It does, however, create the buzz needed for a successful launch in the international television market as discussed in a recentWired article:

As noted by Japanese entrepreneur Joi Ito, fans of the Japanese anime series Naruto regularly post translated episodes of the show to BitTorrent, which attracts more fans to the series.

With box sets and special edition DVDs, Ito wrote, the copyright holders can make a tidy sum from fans prepared to “spend thousands of dollars on one show.”

Scott, of Scott’s Anime Almanac doesn’t quite buy into Ito’s vision, and while we do buy legal copies of shows we’ve discovered via fan-subs, Scott’s belief may be more widespread than we’d like to believe:

Make no mistakes about it, fansubs are killing the anime market for the US. If you don’t believe me, think about just how many anime DVDs have you purchased recently compared to the number of shows you’ve downloaded for free. I for one will admit I haven’t bought any of the shows I’ve watched fansubbed yet. Now I would like to think that the reason for this is because none of them have been released yet, and when DearS and Girls Bravo come out this summer I’m going to buy them. But since that hasn’t happened yet, I can’t really claim I will really do so. Sometimes I begin to doubt that I will.

Fans like Scott are in a rough place. Until the Japanese industry ramps up its sales to international markets, the underground distribution method will remain. This is compounded by the fact that commercial interests aren’t necessarily driving the business. Anime studios remain largely small-scale operations, and the artists who hand-draw the cells aren’t necessarily savvy business people. Hmm, this sounds like another artist-driven industry.

Just as problematic is a widespread lack of business savvy. While toymakers and TV broadcasters have made billions from marketing anime characters, most studios are run by artists who rose through the ranks of animators but have little experience in management. That has often led to a focus on production over profits and a failure to make money even with successes. Until recently almost all anime studios simply sold their programs to TV companies for a one-off fee, giving up any claim to further revenues from their creations.

As the industry struggles to find its business footing, talent issues are arising. The number of artists who draw anime are decreasing, and companies are starting to outsource work to South Korea (this isn’t a Japan-only phenomenon; U.S. animation studios have been doing this for a while, most notably with The Simpsons). This could get interesting as Korea’s own animation industry grows.

There are some signs of change. Yumeta pays rookie animators a minimum of $1,150 a month plus benefits, and salaries are increased substantially after a year. Production I.G., meanwhile, says it no longer relies on workers from overseas. And the company has reformed its salary system, now rewarding animators based on the popularity of their work. This means that a handful of top animators are now making as much as $180,000 a year. “Of course, it raises production costs, but I.G.’s strength is our people,” says CEO Mitsuhisa Ishikawa. “If you invest in people, they’ll pay you back with high-quality animation.”

A few years ago, you could safely confess your adoration for anime in a crowd of hipsters and only get a few knowing nods. Nowadays, everyoneknows about Adult Swim on the Cartoon Network. You can discuss Cowboy Bebop over after-dinner drinks. What’s up with that?

And don’t go thinking you’re safe if you harbor a manga fetish. Every major U.S. publisher has or is contemplating a manga line. Shelves of old favorites like Inu-yasha fill bookstores. Sure, you were hip to Kagome and gang way back when, but now it’s time to find a new cool. After all, when The Christian Science Monitor does primer stories on your favorite fetishes, it’s only a matter of time before your mother starts talking up Samurai Champloo (now showing, by the way, on the aforementioned Adult Swim, and just as great as ever!) at family gatherings.

What began as a distinctly Japanese style of visual storytelling has gone global. As culture watchers from Tokyo to London point out, anime is far more than Pikachu and PowerPuff girls. The art form has achieved what no other indigenous cultural expression has managed to do: become widespread enough to challenge America’s stranglehold on entertainment.

You can stay one step ahead of the in-crowd by making a pilgrimage to the new center of anime and manga cool: the Akihabara District in Tokyo. “What?” you say. “Akihabara? That’s for just for electronics.”

Not anymore. The district has emerged as Anime Central, with a rising number of shops devoted to the entertainment. Tourists oohing and aahing over cameras are now competing for scarce sidewalk space with fans looking for the next big thing. And, where young men flock, young women find cause for humor:

The streets of Akihabara, once known strictly as the electronics hub of Tokyo, are now filled with young men in pursuit of the growing number of anime shops. “These guys just hang out, [they have] no other life,” he says, standing on the sidewalk next to a small knot of anime fans. A young woman nearby, who does not want her name used, adds, “many of them don’t know how to love a real woman because all they know are these silly anime women.” 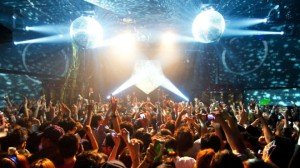 We’re going to be honest: we were surprised by the quality of rock ‘n roll bars we found in Japan. Maybe it’s because we’re jaded or maybe it’s because we expected strangeness, but we spent a lot of time saying, “Hey, this place has cool music.” Do not laugh at our wide-eyed wonder — have you checked out the jukeboxes in Los Angeles clubs lately? Not good stuff at all.

Thus we were pleased to run across this review of Garage Land in Shibuya-ku. It sounds exactly like the kind of place Planet Tokyo would hang out after a long day of wandering the streets of Tokyo. There’s something comforting about knowing we can get a cold beer while listening to Joe Strummer and the Mescaleros. Or The Clash. Or The Sex Pistols. Or The English Beat. Heck, there’s probably a good selection of X and the Ramones for all we know (and customers can bring their own tunes if they want).

We used to go out drinking a lot and think, ‘Wouldn’t it be great if there was a bar that played exactly the kind of music we like,’ ” explains [co-owner Tsutomu] Saito.

If only more bar owners shared this sensibility. We might consider leaving PT‘s international headquarters more often. Of course, given the club’s location, it’s probably the only punk bar in the world packed with people.