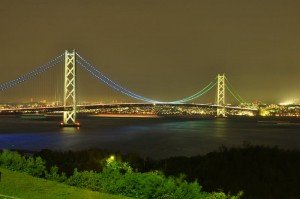 Japan’s Inland Sea, called “Seto Naikai” in Japanese, is one of Japan’s best kept secrets. While most people only know the bigger islands (called “shima”) such as Awajishima and Shodoshima with extensive ferry services to bring people, cars and trucks from the mainland, the smaller islands are accessible only by the occasional ferry or private boat. As the smaller islands become more popular even among Japanese travelers, the options for getting around to them are increasing, but tourism along the Inland Sea is still in its infancy.

Unfortunately, the ferry services do not cover inter-island travel. You can take a ferry from the mainland to most any island, but you’ll have to go back to the mainland each time and catch another ferry to take you further east or further west. This is expensive and time-consuming. Although hiring a private boat to get around the Inland Sea is not cheap either (20,000 to 50,000 yen per day per person depending on if you want meals and accommodation included) it gives you a chance to see things that other tourists would never get to see.

Awajishima is the biggest island in the Seto Naikai. It has only been accessible to the masses since they built the Akashi-Kaikyo bridge in 1990, the longest suspension bridge in the world. The island sits right in the middle of Honshu and Shikoku. You can take a train, bus or ferry there from Kobe.

Shodoshima is the second largest island in the Seto Naikai and resides in Kagawa Prefecture. Shodoshima is famous for its olives and you will find olive trees everywhere there. There is an olive picking season and the island thrives on sales of products made from olives and olive oil. There is a high-speed ferry from Osaka to Shodoshima for approximately 5,800 yen.

Fast becoming a very popular island among foreigners, Naoshima is also called Benesse Art Site. The island features modern art in many forms from a traditional art museum, to gigantic sculptures situated around the island and the “Art House Project” that puts art exhibits in old, once-abandoned Japanese houses. Anyone who loves art should spend at least a day here. Access by ferry from Okayama.

This small island of 700 people has been on the foreign tourist map for 20 years now because of promotion by the Okayama Prefectural government. It is still largely undiscovered, however, as tourism has been limited to those who live in Japan and are “in the know.” Years of prefectural backing have resulted in a user-friendly, English-speaking infrastructure. Once limited by the number of tourists the prefecture would accept, the island is now opening up and is able to accept more visitors. Shiraishijima is best known for its beach and traditional Japanese island culture. Accessible by ferry from Kasaoka.