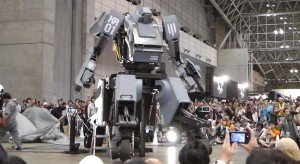 A surprisingly large portion of my first trip to Tokyo was spent scouring various toy stores in search of Japanese robots. What could be a cooler souvenir of my trip to Japan? It was the mid-90’s and after days of searching I had a couple of articulated plastic robot figures and deep sense of disappointment.

Japanese robots have come a long way since then, mostly thanks to Sony. The QRIO (previously known as “The Sony Dream Robot”) is a “biped entertainment robot”.

That would be a robot that walks on two legs (biped), although I’m not sure exactly what the entertainment part is. Hopefully he doesn’t sing.

The QRIO is quite an advance over the quadruped AIBO. According to the Sony website:

QRIO not only walks on two legs, it can also manage uneven surfaces, dance, recognize people’s faces and voices, and carry on conversation.

I was actually hoping that the entertainment part might refer to an ability to manage the ever increasing number of electronic devices in my living room. Who needs a universal remote when you’ve got an entertainment robot?

For now the QRIO is just a prototype. Judging from QRIO’s personal appearance schedule the life of a prototype is pretty rough. Hopefully they’ll be mass producing these soon so QRIO doesn’t have to spend so much time on the road by himself.