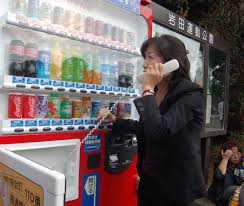 When I contemplate a hypothetical situation where I might need emergency assistance in Japan two things come to mind:

Second, how the heck do you tell dispatch where the emergency is?

Having been lost a few times on the streets of Tokyo I think this is a great idea. I’m actually kind of surprised it took this long for someone to think of this. Not only will these stickers help with emergency services, but they’ll also help lost tourists.

Just one question. Since the buildings of Tokyo are numbered in the order they were built (and not sequentially as they are in most other parts of the world), how will these vending machines be numbered?