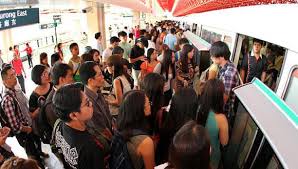 If you’ve ever had the privilege of riding the train through Tokyo during rush hour, you will either be amused or grateful to learn that the number of rails and hand straps on the trains will be increased. Apparently, your fellow passengers are not safety devices.

There are no rules regarding capacity on the trains, though there is an estimated standing space of 0.3 square meters per person. We just picked up ruler and that’s not a whole lot of space for standing. Based on our experience, you can fit a lot of people in that little fraction of a square meter — especially if not everyone is touching the floor.

Increased strap and hand rail capacity will be phased in, thanks to passengers who responded to train company surveys with an overwhelming “Yes!” when it came to the issue of having something to hold during commutes. Again, we remind you: fellow passengers do not appreciate bear hugs from strangers. Train safety has become a high profile issue due to a recent train crash. However, even before that tragedy, concern was growing: