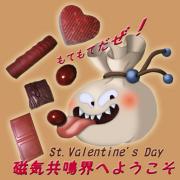 Though Valentine’s Day is not a national holiday in Japan, the tradition of celebrating with chocolates has grown. Only in Japan, it’s the men who get the chocolates. Seems fair to us, especially since just one month later, “White Day” — a manufactured holiday — was established to allow men to assuage their guilt by giving gifts to women.

Of course there’s a twist:

Not surprisingly, chocolate-giving for Valentine’s Day has taken on a uniquely Japanese approach, leading to the holiday accounting for more than half the annual chocolate sales in the country. Instead of paper Valentine’s, women give boxes of chocolate to bosses, co-workers, (male) friends, male family members, and sweethearts.

With so much chocolate trading hands, it’s worthwhile to note that the gifts come in two levels. Honmei-choco is expensive and reserved for special men. On the other end of the spectrum. . .

Chocolate given to men whom women don’t feel special love are called “giri (obligation)-choco (chocolate).” Chocolate given to co-workers and bosses are usually considered as giri-choco. Many men feel embarrassed if they don’t receive any chocolate on Valentine’s Day. Women usually make sure to give giri-choco to men around them so that they don’t feel left out. The average price range for giri-choco is from 100 yen to 300 yen each.